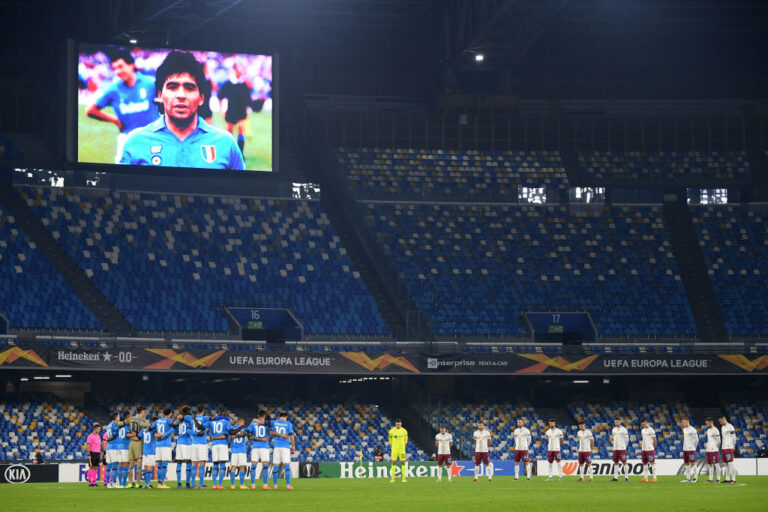 An Emotional Farewell to Diego .

It was a sad day for all football fans all around the world , and even more gloomy for those from Naples and Argentina . Diego Armando Maradona has passed away .
There are no words from anyone , only the despair brought by his death . I doubt there will ever be word from anyone on his death , only tears . The God Of Naples is no longer with us on this planet . The fans are heartbroken , and have created a memorial with flowers and photos and scarves and candles outside the San Paolo . They have held a funeral here even when the body of their God is more than 11,000 kilometers away .

A visibily emotional Lorenzo Insigne alongwith Tomasso Starace put a bouquet of flowers on the fan-made memorial before the match . Thousands of fans gathered outside the San Paolo . Campania is a red zone in Italy , but the Police of Naples did not fine a single person . Instead they helped in making sure the safety of the fans . This shows the blow his death has dealt to the people of Napoli .

During the match you could hear the chants from outside the Stadio . Our players were clearly affected emotionally , mentally and physically . Mistakes came from players like Koulibaly , Maksimovic , Demme , Bakayoko , all of them giving the ball away very very cheaply on many ocassions . Thankfully , Zielinski produced a moment of quality and crossed the ball from the byline to Politano for a tap-in . It is also worth mentioning that Rijeka's LB (Armando Anastasio) was a former Napoli youth player , and is a Neapolitan .

Lorenzo Insigne , Dries Mertens , Lobotka , Fabian Ruiz , Lozano came on in the second half and all had shots at goal . Lozano got at the end of a wonderful pass from Insigne from the halfway line and had loads of time to find the net and he duly obliged . Insigne had 2 wonderful chances of which he should have put away at least one , for an almost poetic and emotional goal . Once he was played in through on goal , and the keeper did really well . In stoppage time , Fabian produced an absolutely sumptuous long ball to Insigne and he was all alone but once again failed to put it way , and that was that .

Rijeka have at least recorded their name in history by being probably one of the last teams to play at the San Paolo before it gets renamed to San Paolo-Maradona .

On the practical side of things , we only need to win one of our last two (Alkmaar away and Real Sociedad at home) to qualify for the last 32 because we won this match . Credit to Gattuso for ensuring a victory from a frankly lackluster Napoli for the most part of the game . Faouzi Ghoulam starting was a surprise and he did quite well in my opinion , but he has lost a yard or two and it was visible when he got forward . That is all for this match report , hope you are dealing well with the huge loss we all have suffered .