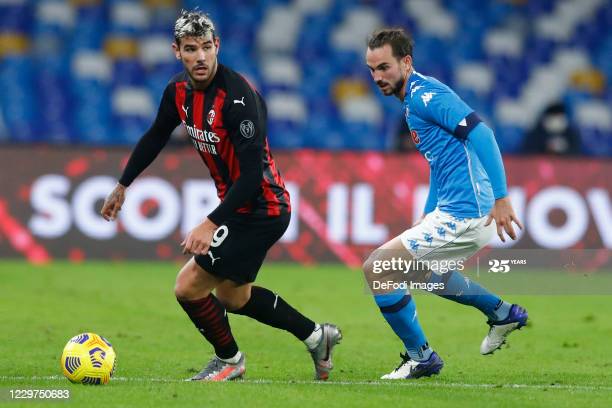 A result well below expectations , especially from what we have seen of Napoli in the first few matches . Gattuso was very angry after the Rijeka game , and said that Napoli should not wait to go behind to wake up . I thought he had solved the issues when we won against Bologna . Well I couldn't have been more wrong . Our rotten home form continued with this defeat to AC Milan . [ The first one in ten years ]

We were absolutely lacklustre in the first 30 minutes . Giovanni Di Lorenzo allowed Theo Hernandez too much space and a player with good attacking instincts put in an early cross which took Koulibaly by surprise . Cross was good and Ibrahimovic did what he does best . Not much Meret could have done , but could have saved it on a good day .

We responded quite well but did not have a cutting edge in front of goal , with Lozano trying to pass when it was easier to shoot during one opening . We also had Giovanni Di Lorenzo hit the post when it was easier to score . Politano was our brightest attacking player in the first half . Insigne was practically non-existent , Mertens popped up a few times and Lozano was lacklustre in his finishing .The referee was card happy throughout the game and gave cards unnecessarily to both Napoli and Milan players . Bakayoko got an absolute howler of a yellow card which proved to be a very important decision in the context of the match .First half ended at 1-0 to Milan

It took us to go two behind to finally wake up . Mario Rui and Koulibaly were completely bamboozled by Ibrahimovic's run and Ante Rebic whipped in a wonderful cross and Ibrahimovic finished with Koulibaly , Rui and Meret all in close proximity . Again , Meret should have come to claim the cross but couldn't and it was 2-0 .

Mario Rui , took out his frustration in the best way by providing a really good attacking force down the left , where an under par Insigne was playing . He assisted Merten's fine finish from the penalty box . Donarumma couldn't save this as he did plenty of other shots . Then came the game-changing moment . Bakayoko went in for a tackle on Hernandez and received another yellow and he was off . Now we faced an uphill task and did pretty well to fight back and almost drew the game with Petagna shooting from close range after a nice link up with Mertens . Then we lost the ball in transition and Jens-Peter Hauge got past Manolas , who had been fairly good all game , and hit it right into the hands of Meret . One shot you would expect Meret to save most of the times . But he didn't and it was 3-1, game over . Milan were clinical , good in defense , mentally focused , and deserved to win the game . We need to work on this mentality issue otherwise we could be in for a fairly average season from our own standards and expectations .

P.S. Osimhen was dearly missed , hope he gets well soon .