It's almost time for the Coppa Italia final. Let's look at the reasons each side could win it all.

This won't be the usual match preview. No look at tactics, no standings, no ranting about form. Sadly that also means no mermaid lessons, bread recipes (though that was a recap, I guess), or me banging my head against my keyboard in frustration.

No, this is a Cup final. That's what we in the business call a "Big Deal". So we'll be treating this one accordingly, and doing things a little bit differently.

First off, let's look at the Napoli side of things. Our intrepid leader Kirsten Schlewitz gives us three reasons why Napoli will come out victorious:

1) Rafa Benitez: He wins trophies, don't you know? For goodness sake, he just won one last year. Since Napoli were already booted out of Europa League, Rafa has to win something to uphold his reputation. The Coppa is all that's left. And because this match is so important, that likely means he'll be playing Goran Pandev from the start. It doesn't matter that Gonzalo Higuain has been declared fit for the final - there's no one better to spur a side on to victory than Pandycakes.

2) Camo: Napoli have demonstrated a strange reluctance to wear their blue home kits this season, despite one of their nicknames being the azzurri. We can only assume it's because they love entering the pitch dressed for battle - if battle fatigues involved splotches of light blue and electric yellow, of course. Football is war, and with Napoli looking toothless so often recently, they need a little something extra to boost their performance.

3) Jose "Ziggy" Callejon: Yes, he's looked a bit "off" as of late, but wouldn't you be looking a bit tired if you'd started 42 games thus far? I'd say Callejon has been the most pleasant surprise of the Napoli season. Many of us thought he'd be just an adequate player, one who clearly exhibit his status as a Real Madrid reject. Instead he's been lively, tricky and annoying to opposing defenses. And considering Ziggy scores a goal every 2.3 games, and he failed to score against Inter last week, he's about due. Science!

Seems reasonable. Though I feel like I have to point out that Napoli won't be wearing camo tomorrow, instead donning these beauties for the occasion.

The squad list released by Rafa for his available players is pretty complete. Napoli have no suspensions for the match (whew) and Gonzalo Higuain passed his fitness test, so is available for the final. With that in mind, here's my predicted lineup for tomorrow: 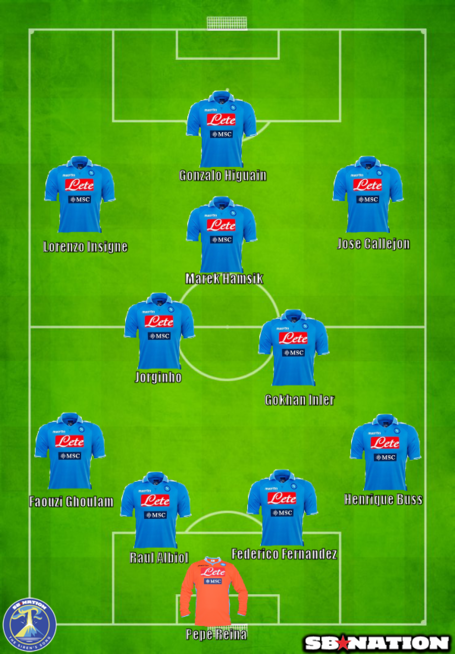 That's about as close to a full-strength side as we can see, and comparing the recent form of Henrique Buss to pre-lung-collapse Chirstian Maggio, that might actually be the first-choice lineup.

Now, to Fiorentina. The always-entertaining Lorenzo from Viola Nation stopped by to tell us why he thinks Fiorentina will win:

1) WE DON'T WEAR CAMO. The first and most important reason why the universe shall bestow upon Fiorentina the honor of the Coppa Italia trophy is that everyone hates recreational camouflage clothing. Beyond the potential politics that I could involve of fetishizing violence and the military-industrial complex, I think everyone has accepted that camo-garb is tacky as well as infuriatingly pointless (I CAN STILL SEE YOU, NAPOLI PLAYERS. STOP TRYING TO BLEND IN). Fiorentina's jersey for the Coppa Italia is another slick and classy affair, all violet with some white trim, that will surely earn favor from the relevant calcio deities.

2) Giuseppe Rossi is back. Yes he hasn't played a competitive minute since early January, and yes we would be very fortunate to get 20 good minutes out of him, but the mere fact that Rossi is in full training with the team and potentially on the bench is a huge psychic boost to everyone around the club. After he went down on the 5th of January in a 1-0 victory against Livorno, it was as if God had surgically amputated the soul from the team. He remains our top scorer with 14 goals, and even if he doesn't play on Saturday, I expect his presence to be important for the locker room and help lift the team for the big occasion. And if he gets on the field... Look out.

3) We're going to want it more. Events on the day will pan out how they pan out, but one thing is certain, we've been waiting 14 years for a major trophy; Napoli broke their drought in 2012, and that can sometimes subtly affect mentality in a big match. This Fiorentina group of players under Montella is desperate to validate their quality and reward the fan-base after just missing the Champions League last season and falling to Juventus in the Europa League this year. A trophy would be the perfect way to do both of the above, while providing a springboard for bigger and better things next year.

Yeah, good luck with that. Though I can't give Lorenzo too much flak since he's a fellow Liverpool fan. We've gotta stick together and all that.

Montella has named a strong squad of available players to pick from, including Giuseppi Rossi who's believed to be available as an impact substitute. However, he's also included the definitely out Mario Gomez (injury) and Juan Cuadrado (suspension) in that squad, so there's a chance that Rossi is just in the squad as a smoke-and-mirrors move. Regardless, here's the side we're most likely to see tomorrow: 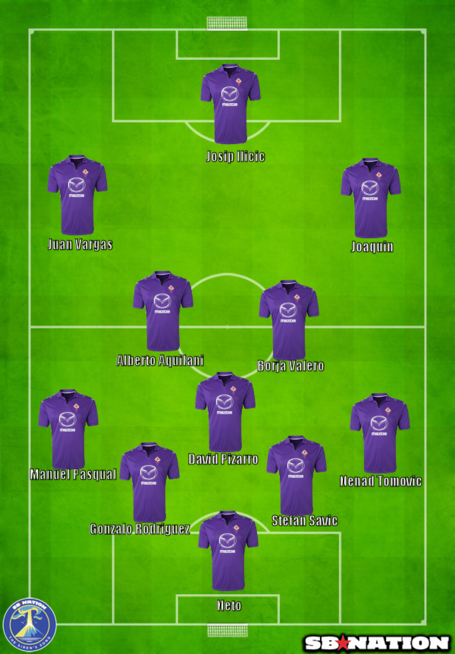 That's also a damn dine side, and one that Napoli will have to do very well to get past. There was some fear from Fiorentina fans that they'd have to field a weakened side after some recent injuries, but it sounds as though Montella will be able to get pretty close to his best side, with the exception of the absences of Gomez and Cuadrado, and the inability to start Rossi.

Lay in supplies and get ready for a crazy match. These are two sides that match up well with one another, and while I'm optimistic of Napoli's chances, it's no sure thing that they can win. It's going to be a heck of a game, and whoever wins will have well earned the right to call themselves Italy's cup champions.