World Cup, Day 2: Netherlands make a mockery of Spain or How Pepe Reina moved up the Goalkeeping Ladder

Share All sharing options for: World Cup, Day 2: Netherlands make a mockery of Spain or How Pepe Reina moved up the Goalkeeping Ladder

Well that was fun, wasn't it?

If you aren't a Spain fan, that is. But if you're a Spain fan you're probably still doing this: 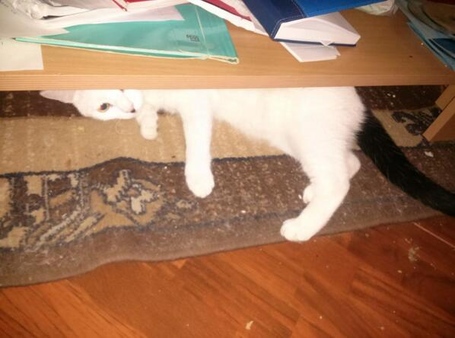 So we're not going to be worried about you reading this post and starting to cry all over again.

Now, this isn't a traditional wrap - if you're looking for full-on match reports, head over to SBN Soccer, where they'll happily provide you all the details. This is a look at Friday's action through the lens of a Napoli fan.

One that's a bit high on painkillers, if we're being perfectly honest here.

Kudos to the Mexico players for not losing their heads completely - after two rather dubious offside calls, it would've been completely understandable if Giovani Dos Santos had attempted to stick his fingers in the linesman's eyes.

It would've been a beautiful bit of karmic retribution had Gio managed to score, but alas, Charles Itandje was there to push the shot away. But Oribe Peralta pounced on the rebound to give Mexico the win.

Perhaps the most interesting part of this match was the fact that die-hard USMNT fans were cheering on Mexico. That's when you know the referee is absolutely atrocious.

Pro tip to Bigon and his cronies: no Cameroonian internationals, mmkay?

Sign Blind! Sign Blind! After goals three, four, and five, you may have forgotten the way Daley Blind split open the Spanish shirts with a perfect curving pass. However, unless you're a Spain fan and spent the majority of the match covering your eyes, rocking back and forth and moaning to yourself, there's no way you missed just how well Blind played (unless you are Conor and you are committed to your previous statements). Sure, Faouzi Ghoulam is working out just fine on the left, but this man is shiny!

Yeah, ok, it was one game and Napoli have bigger worries. Perhaps they'd like to tempt Ron Vlaar away from Aston Villa, instead. The centerback was quite impressive today, and hey, Villa are in desperate need of a bit of cash.

Finally, does anyone think that maybe Pepe Reina won't be spending the rest of this tournament on the bench? Vicente Del Bosque just might have learned his lesson about fielding goalkeepers that haven't, you know, played much. As in just two league games not played much. Casillas served up Robin van Persie perfectly for Holland's fourth, and Arjen Robben danced into an empty net for their fifth.

Alexis Sánchez is sexy. No other takeaways are necessary from this match.

Too bad Napoli already have their fill of tiny quick tricky forwards. Oh well, a penny saved is a penny earned and all that.

Also, Napoli paid like 12m for Edu Vargas and he sure looks like he's worth it so can he be given another chance? This is getting a bit ridiculous.

Yeah I lied when I said you were getting just one takeaway. Seriously, though, if you missed this match for some devastating reason, like your leg caught fire, go find the replay right now.

What were your favorite moments from the second day of the World Cup? Anyone in particular catch your eye? Let us know in the comments!