Wondering what's being said about Napoli after the win over Dortmund? Look no further.

Share All sharing options for: Celebrating a Napoli victory

How's everyone feeling this morning? Bit of a morning-after hangover? Did the adrenaline from last night keep you up in to the early hours? Did you have nightmares about Jurgen Klopp's rage-face? Or did you slip into a peaceful sleep, filled with dreams of the goal from Gonzalo Higuaín and Lorenzo Insigne hopping the railing?

While there's plenty to discuss about Napoli's victory over Borussia Dortmund on Wednesday, we'll save that for later in the day. Right now should be a time of celebration. So let's have a look... 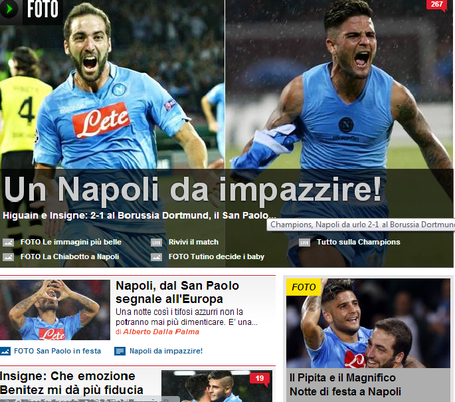 Here's the front page of the print edition.

La Gazzetta wasn't quite as enamored of Napoli, allowing Milan's win over Celtic to sneak in to the front page, as well as Chelsea's loss to Basel and, for some strange reason, a story on Inter-Juve. But they supposedly have a photogallery of the match, although for the life of me I couldn't get more than one photo to show up.

Gazetta's front page. Again, what's with the sharing? Give it all to Napoli.

Napoli's official Twitter account gave us a few photos, including retweets from the twitter accounts of Pepe Reina, Jose Callejón,  Raúl Albiol and Gökhan Inler. The photos weren't too exciting though -- mostly the players celebrating with their ladies. Or, in Inler's case, a shot of him going through two Dortmund players.

BVB's Twitter, on the other hand, gave us this spectacular demonstration of the German language:

Meanwhile, the official Dortmund site looked like this. Personally, I was hoping for more pain and suffering.

And, of course, TuttoNapoli has everything you could ever want to relieve last night, including photos of the San Paolo before the match, photos of the tifosi and a cute little gallery of Insigne after he scores.