Taken Down On The Counter

A dour affair at the San Paolo was put to bed when Napoli were once again shredded on the counter. Let's look at what happened to cause it.

Share All sharing options for: Taken Down On The Counter

Well, that was a painful Saturday. A home match against a mostly-unimpressive Parma side leading up to a crucial Champions League tie away to Dortmund was critical to win for momentum and to keep with with the other front-runners in Serie A. This should have been a tune-up, a way to recharge the batteries after the international break and prepare for the trip to Germany.

Well, that didn't so much happen.

Instead, we were treated to eighty minutes of mostly-dour football. Biffed chances, frequent loss of possession in midfield, heartstopping moments in front of Pepe Reina's goal, an injury to Marek Hamšík, and then... this:

Once more, like on several other painful occasions this season, Napoli got caught napping on a counter. Another bad midfield giveaway, and a few short seconds later, boom. So how did it happen? 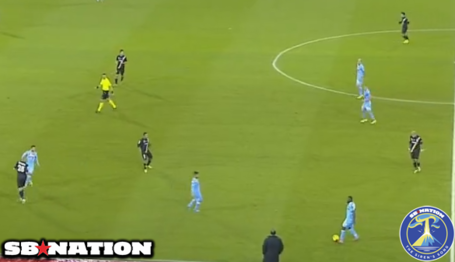 Here we see Pablo Armero with the ball, about to pass it up a tick to Lorenzo Insigne. Dries Mertens is on the left of your screen, with the pivot of Gökhan Inler and Valon Behrami on the right. Parma are still getting organized and compacting their defense after losing possession a few moments before. 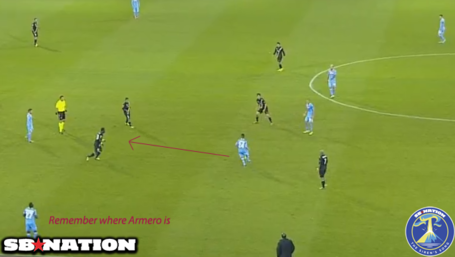 A few seconds later, Insigne has given the ball to Inler, has just gotten it back, and is looking to pass it upfield to Mertens. Inler and Mertens have pushed up to the top of the center circle, and Armero has pushed well up the left flank. Remember that. Insigne makes his pass, and... 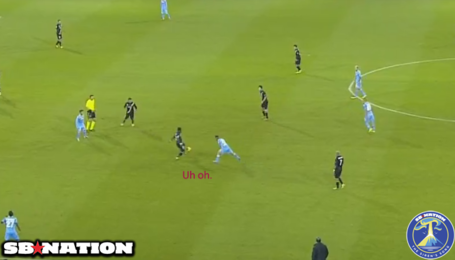 ... oops. A sloppy pass goes straight to the feet of a Parma defender, and the break is on. 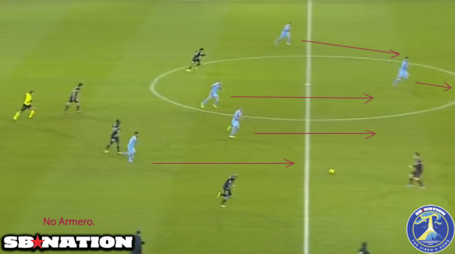 Here we see Antonio Cassano about to receive the ball towards Napoli's left. Insigne, Inler, and Behrami are breaking back as hard as they can, but they were too high up the pitch to make much affect. At the top of your screen is Christian Maggio racing back, as is Raul Albiol on your right. Just off the screen is Miguel Britos starting his turn to try and cut off Cassano's run. Conspicuously absent? Pablo Armero. 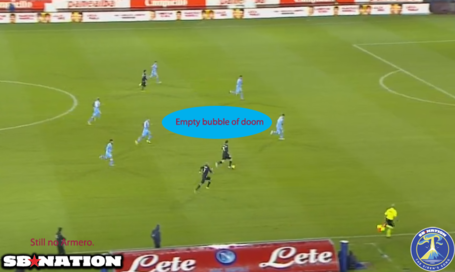 Here's where things start getting tricky for Napoli. Cassano's carrying the ball in to the final third, with Albiol and Britos trying hard to reduce Cassano's options. Complicating matters are Nicola Sansone and Jonathan Biabiany coming up to support him on either side. Maggio in theory is reponsible for Sansone, though he doesn't wind up doing much to check his run. If Armero was anywhere near the play (here's a hint: he's not), he'd be on Biabiany, but, well, he's not, and Biabiany has a free run. That causes Britos to get crossed up in figuring out where to go from here. Inler is closing in, but he's not close enough to pressure Cassano. Albiol is also still too far. This creates the "empty bubble of doom" indicated above, a space for Cassano to drift in to at will to select a shot or pass without pressure. 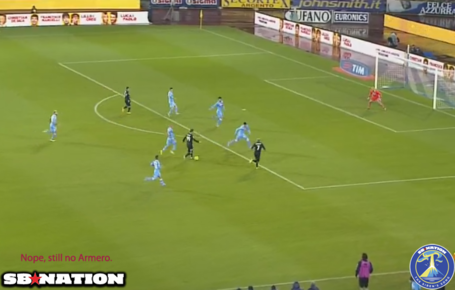 Here's the penultimate touch before Cassano rifles home. Inler is finally in position to do something, but it's too little, too late. Maggio has run past Sansone, who's drifting in to space to receive a potential pass behind the defense. Britos also finally decides to cover Biabiany, but that's also too little, too late. Unfortunately, given that Albiol seems to be playing for a rebound off Pepe Reina, Britos' move opens a window for Cassano to shoot through, which he takes gladly. And let's look... yeah, no, still no sign of Armero.

Long story short, this one was given up by a culmination of errors. Insigne got too focused on the end result of his action and didn't check his passing lane. Armero never really tracked back, which created the lack of coverage on the left that led to Britos's critical moment of indecision. Inler and Behrami got caught a little too far up the pitch when the counter started, and couldn't get back in time. Those plus Parma's attacking triumvirate handling their side of the equation just about perfectly added up to a bad time for Napoli.

Given Dortmund's propensity to hit on hard counters under Jürgen Klopp, one would hope that Rafa Benitez and company have spent much of their training time since the match drilling on counters, because odds are good that they'll be facing a few. Counters have been a problem for Napoli in general this season, and it's one they need to fix soon before it becomes the Achilles' heel of their season.